The Art of Preserving the Past — Chinese Painting Conservation Program, Smithsonian Institute

Imagination, in-depth understanding and innovation all play a significant role in rescuing and maintaining artefacts for future generations to learn from and enjoy, according to senior Hong Kong conservator Andrew Chung.

Being able to appreciate a work of art down the centuries is not just a reflection of the artist’s ability to transcend time through the captivating technique and life essence instilled in the work. When the calligrapher and painter put down their brushes, and the sculptor and craftsman set aside their tools, the conservator’s work begins.

What is involved in this often unsung yet vital aspect of longevity in the creative world? “First do no harm!” is the view of Andrew Chung Tat-chi, Hong Kong Museum of History conservator and former grantee of an eye-opening US exchange programme, supported by The Robert H. N. Ho Family Foundation. 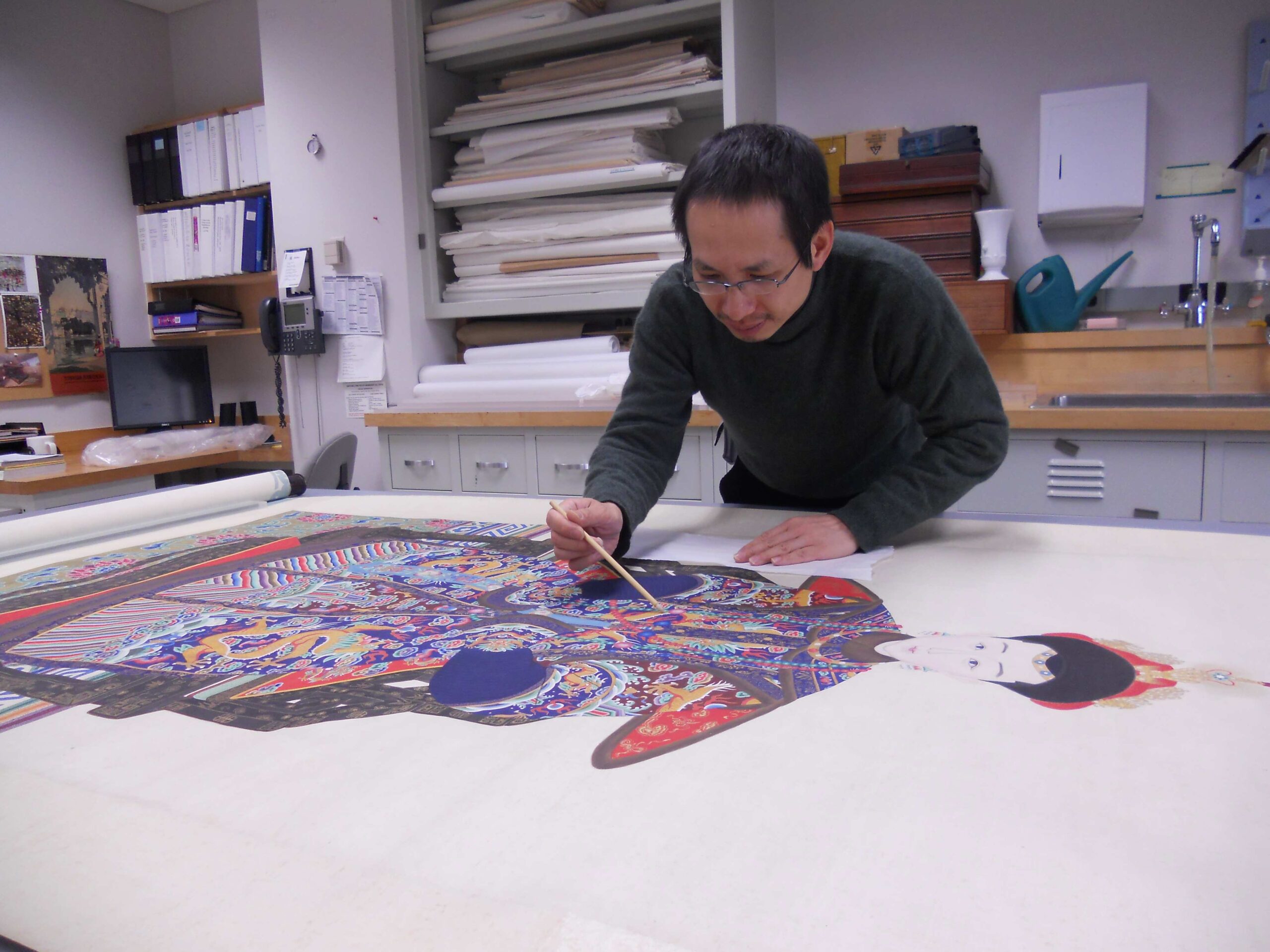 So like a medic dedicated to the preservation of life, Chung has spent more than two decades meticulously “diagnosing” water-stained manuscripts, mouldy photographs, creased letters, cracked and holed silk scrolls, among countless other fragile, decaying objects of historical value.

While many people may view “conservator” as simply another word for “renovator”, this is not the case, explained Chung, dressed in a white lab coat and seated in his office in the museum. In cleaning a painting, soluble elements may be removed. In repairing a work, the negative effects of a remedy over the long term may outweigh the short-term benefits. “Our job first demands a deep understanding of the work itself – its materials, creative process, craftsmanship and problems – before we come up with sensible conservation proposals, which are then evaluated to arrive at the best decision. Restoration is not always the answer.”

Conservation thus comprises “passive preservation and active restoration”, said Chung. Artefacts that land promptly in the Hong Kong Museum of History and its counterparts in the city and around the world are among the fortunate ones as lighting, temperature and humidity are strictly controlled to protect collections. “Prevention is better than cure because every treatment has a risk,” he noted.

But most places on the planet lack such perfect conditions, and documents and pieces of art inevitably deteriorate over time. When works descend into a poor condition, such as a rare book riven with worm holes, then it is the conservator’s responsibility to intervene, he said.

Chung, a Hong Kong Baptist College (later University) chemistry graduate, started his career in conservation in 1991 at the Sam Tung Uk Museum – a reconstructed Hakka walled village. He moved on to paper document conservation at the Hong Kong Central Library in 2000, and historical documents and manuscripts in his current position, held since 2009.

During his insightful three-month exchange programme at the Freer Gallery of Art in Washington, DC, in 2011, Chung was able to extend his practical knowledge and gain fresh inspiration, working under the mentorship of master conservator Gu Xiang-mei, a specialist in ancient Chinese paintings, along with experienced colleagues from around the world. The Freer Gallery is one of two Asian art museums at the renowned Smithsonian Institution, with an extensive collection of Chinese paintings, and calligraphy, and other Asian works.

“It was a rare opportunity,” said Chung, who was one of two Hong Kong conservators to participate in the exchange programme, each going to the Freer Gallery at separate times. “The remarkable experts there taught me a lot, from their methods and skills to the way they examined works, conducted research and tackled problems.”

In the early days, he said, museums in Hong Kong often exhibited collections from overseas, which were just expected to be kept intact during the loan period, thereby limiting the scope of restoration conducted in the city. However, Freer Gallery handled a full range of conservation issues, enabling Chung to widen his working horizons, capabilities and confidence. Working on cracked Song Dynasty handscrolls, for example, was a first for Chung. “Only when you encounter a problem yourself can you get a grip on it.”

He added: “Without having seen someone handle it, or having helped with the process myself, I could not have imagined I could do it.”

The exchange also provided fascinating insight into the importance of access to leading tools and materials. Such access was difficult in Hong Kong, given a lack of suppliers due to previously non-existent demand. Chung returned home with many different brushes that have greatly added to the Conservation Office’s capabilities as well as useful contacts for ordering further specialised equipment since then.

Where previously he used to think there was only one way to handle a task, and some items would be impossible to recover, his exposure to more restoration options in the US has transformed his way of looking at his job. “Doing conservation well does not only involve knowing the basics,” he explained. “It is also about how to use your imagination to achieve what you want to do. For instance, it may not be necessary to use original materials to repair a painting if you can simulate them to create the look of the piece… Even your choice of tools involves creativity.”

For Chung, who learned to paint and has continuously sought to build his knowledge of Chinese art and literature since becoming a conservator, it is the ultimate goal of preserving culture that makes the profession meaningful: “Through conservation, we seek to keep alive the treasures passed down by our forebears.” Without such work, researchers would find it harder to learn about the past, he said. “I believe we are playing a role in rediscovering history.”

Forbidden City: Inside the Court of China’s Emperors