Living Buddhism as the Starting Point

On October 17, 2014, what was The Tung Lin Kok Yuen Canada Foundation Programme in Buddhism and Contemporary Society at The University of British Columbia (UBC) received a new name. With this new name, it joins a vibrant group of institutions, programmes, and people supported by The Robert H. N. Ho Family Foundation. The contributions of The Tung Lin Kok Yuen Canada Foundation in support of Buddhist studies at UBC will continue to be celebrated–its name given to the programme’s distinguished speaker series and annual conference.

Among the many Buddhist studies initiatives in North America, the newly minted The Robert H. N. Ho Family Foundation Programme in Buddhism and Contemporary Society has a unique focus: living Buddhism. Whether Buddhism lives in the form of ideas, practices, or communities, it has a significant impact on global society. It lives, for example, in the community of a man who attends a Mahayana temple, offering gratitude, service, and undertaking bodhisattva precepts; in the ideas of a woman who treats the Buddha and Buddhist teachers as philosophers in their own right, finding meaningful ways to conceive of the world; in the values of a monk who belongs to a Theravada lineage, and who ordains trees, wrapping them in saffron robes to prevent commercial logging; and in the practice of a woman who learns Mindfulness-Based-Stress-Reduction techniques from her workplace counsellor, allowing her to better cope with anxiety.

In supporting this programme, The Robert H. N. Ho Family Foundation creates a venue for deepening awareness and tolerance among scholars, our students, and our local community as we analyse the ongoing impact of living Buddhism. Through courses, public events, and scholarly conferences, and in cooperation with colleagues at UBC and in the expanding The Robert H. N. Ho Family Foundation global network of Buddhist studies, I am honoured to add my voice to the programme and offer my approach to the study of modern Buddhist social and institutional ethics and to its activities. 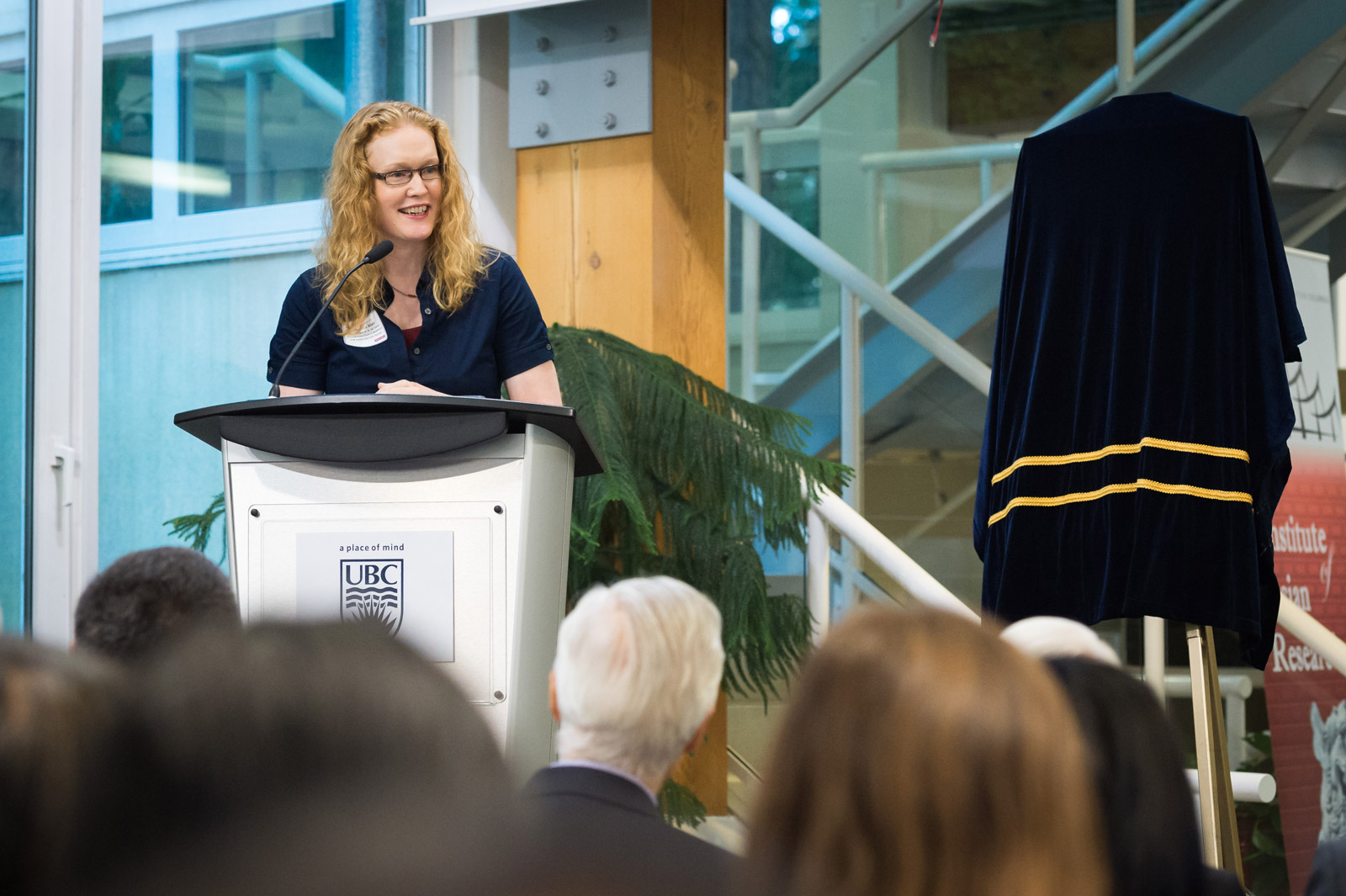 How I came to study modern Buddhism

I arrived at the study of modern Buddhism driven by a persistent curiosity about what it means to be a good person. How, I wondered, do Buddhists determine what is good and struggle to be good people? How does Buddhism enable people to nurture capacities of mind and body, and to develop transformative relationships with others? My journey to the study of modern Buddhism began when this curiosity prompted me to leave a degree in industrial chemistry in order to pursue one in the humanities, where I studied the history of religion, as well as the culture and language of Japan. But it was while I was living in Japan as an undergraduate exchange student that I encountered living Buddhism and Buddhists every day. I was struck by the differences between what I had learned about Buddhism in the classroom, and the Buddhism I saw in society.

After I returned to Canada, it seemed natural to continue this encounter as a graduate student, and soon I was enrolled in the programme in Asian religions at McGill University. There, I began a course of academic Buddhist studies in what has become the traditional way: I studied Sanskrit and Pāli, slowly learned to read, translate, and study the composition of texts in the earliest Buddhist canons, and delved deeply into the works of my scholarly ancestors. I was drawn to Buddhist philosophy, especially (and unsurprisingly) ethics, and discovered a wealth of scholarly reflections on how to bring the wisdom of ancient canons into meaningful conversation with the ethical issues of the present day. What, indeed, can Buddhism tell us about a modern ethical and legal idea such as human rights? But here, it seemed to me, I came to a crossroads. In one direction, there laid a well-marked road, inviting me to further the study of Buddhist texts and the chance to strive for a respected kind of mastery. In the other direction, there laid a barely discernible footpath that led towards an as-yet undefined inquiry into what modern and living Buddhists thought about human rights and social issues. Such grand changes of direction, from science to humanities, ancient to modern, scripture to popular text, have served me well at UBC’s The Robert H. N. Ho Family Foundation Programme in Buddhism and Contemporary Society.

It did not take me long to realise after my arrival here at UBC that the programme had been planted in fertile ground. The intellectual climate in which we teach and study has been shaped by the city’s geographical position, the tides of migration, and the diligent efforts of those who sought to make the most of these opportunities. Although we sometimes take our location on the Pacific for granted, we should be mindful of the way it serves as a great gateway—one that opens in two directions. We present Canada to the world’s most dynamic economies, and we are positioned to welcome those who bring more precious cargo: vibrant cultural traditions and the stimulating ideas and practices that they contain.

Buddhism, its traditions and ideas now cross with ease: the dharma has crossed this great ocean with ease, in the hearts and minds of those who travel by sea and air, in the information that we share on paper and in digital form. There is tremendous opportunity in studying Buddhism at the point where all of these currents collide and mingle.

Our programme has made the most of the interest that Vancouver’s cultural and intellectual life has generated in Buddhism. Through courses, community events, and scholarly conferences, people from different walks of life have an opportunity to learn about living Buddhism, and to meet one another. The programme is structured to serve three overlapping communities: students, citizens, and scholars.

Citizens are invited to join students at our public events, which are tailored to present a diversity of perspectives. We explicitly invite both scholarly and popular speakers, whose expertise spans the many types of Buddhism and many regions of the world. Speakers themselves are representative of living Buddhism itself: women and men, lay specialists and monks, meditation teachers and scientists, historians and activists. Our annual conferences bring together scholars from around the world, enabling sustained discussions on topics that might not otherwise receive attention. Our first conference focused on global Buddhisms as they have developed in Vancouver and Canada; our next conference will be devoted to the relation of Buddhism to physical, mental, and spiritual wellbeing.

For students, exploring Buddhism as it lives today requires both an openness to its diversity and to the different ways that practitioners and scholars analyze its diversity. Courses supported by the programme are guided by a principle of “methodological pluralism.” In the basic Introduction to Buddhism course, for example, students are exposed to techniques available in the humanities, social sciences, and sciences, and I encourage them to approach living Buddhism in multiple ways whether they choose to research monastic economies in Burma, modern lay associations in China, devotional practices in Tibet, or contemporary Buddhist art in Europe. The breadth of the aesthetic, historical, and ritual dimensions of Buddhism is available to them. Students are encouraged, too, to explore modern developments in the philosophy, and in the practices of meditation—its effects on the brain, which are traced today in ways made possible by the latest scientific imaging techniques.

The programme demonstrates that the goals of a liberal arts education and the values of Buddhism can coincide. Running throughout courses, public lectures, and conferences is the genuine desire of its participants to understand living Buddhism, and to do so in ways that are tolerant, thoughtful, and open to its diversity. I look forward to what its future will bring.

The Allure of the Past