Chemistry is defined as the study of change in matter (while physics examines the transformations of energy). The Chinese word for chemistry is hua xue, literally the study of change, an apt description. What, one might ask has this to do with Buddhism, and the wonderful manifestations of Buddhist art at the Mogao Grottoes of Dunhuang? A great deal, in fact. On reflection, one realizes that the large scale changes over time at the site, even on the most cursory of inspections – the transformations of matter – are obvious and profound. Closer examination at the small scale shows evident color changes, under the influence of light and humidity, that have occurred in the pigments of the wall paintings and sculpture: the white pigment of lead, lead white, favored for the painting of bodies and faces, has changed into a black oxide of lead, known as plattnerite, which is why faces are often black; salts in the plaster have corroded the paintings, patches of painting have fallen from the rock walls to be shattered on the floor and irretrievably lost. All indeed is change, some processes are slow, others rapid and some instantaneous, as when paintings fall from the walls.

Some would argue, as did the misguided poet, Walt Whitman, who gazed awestruck at the heavens on a clear night after hearing an astronomer lecture. His poem, “When I heard the Learned Astronomer” expounds on the notion that scientific study takes the mystery and beauty out of nature. Nothing could be further from the truth. Hua xue opens new dimensions of understanding and enhances appreciation, akin to turning the pages of a history book and revealing a wonderful hitherto hidden chapter. Nothing is lost and everything gained. The painting and sculpture of Mogao, in its often deteriorated form, the result of age and exposure, is best viewed through the dual lenses of esthetic appreciation and scientific understanding. 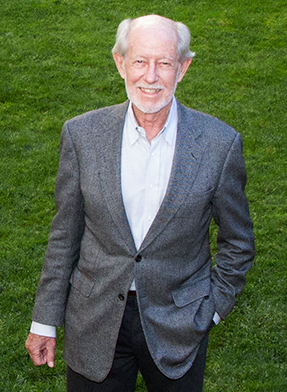 Neville Agnew, has led the China initiative of the Getty Conservation Institute and the collaboration with the Dunhuang Academy since 1989. Photo by Anna Flavin, Getty Trust.

Such are the joys of chemistry, indeed of science broadly writ, since physics and biology are also no less important for understanding change. Which brings us to the subject of conservation of heritage in all of its multifaceted dimensions. Change is inevitable, irreversible, and cumulative: what is lost is gone forever; what has changed cannot be reversed. Restoration, some might say is the answer to loss or change, but this is really only window-dressing, as the authentic cannot be recreated. So why study the phenomena and processes of change? The answer is, through understanding change, in its many manifestations, we can find ways to slow the inevitable onslaught of time and the processes of deterioration – slow down the transformations of chemistry and physics – not halt them, that is impossible, since as we know from time’s arrow – the fundamental law of entropy dictates an inexorable change to greater disorder in a system: a trend to randomness from ordered structure.

Would the Buddhist monks and devotees who created the caves of Mogao in ancient times, and also the scores of greater and lesser other sites along the Silk Road, approve of our present day efforts to preserve the physicality of the cave temples and art and the documents, scrolls, and banners from Mogao’s famed Library Cave, Cave 17? Undoubtedly so, it would seem to me. Although the caves were sometimes repainted as dynasties changed and new patrons commissioned new paintings and sculpture for their own karmic merit, the assiduous hoarding in Cave 17 attests to the impulse to preserve. Elsewhere in China- for example at the Yunjusi site near Beijing, where thousands of Buddhist stone stele were stored underground – another extraordinary trove, like that of Mogao – the same impulse to preserve is evident.

Though cultural heritage today serves multiple purposes, from a desire to save the evidence of the past for purposes as diverse as scholarship, education, or religious ones, not to mention the economic benefit from tourism, the fundamental impulse is incontrovertible: to keep the significance as manifested in the historic, artistic and scientific values intact, as well as the social attributes unimpaired, yet accessible to society. The management and conservation master plan for the Mogao Grottoes, created by the Dunhuang Academy (DA) with the assistance of the Getty Conservation Institute (GCI), is based on goals that reflect these values: study, preservation, and societal access for pleasure and education.

Study can take many guises, for example, the practice of copying as a means of study and a way of understanding has an ancient pedigree in China and finds a parallel in conservation. Both require intense scrutiny, examination, and a knowledge of the materials used in the creation of the art work, and the methods of application. Both conservation and replication or copying- and copying is emphatically not a fraudulent attempt at deception, which unfortunately is too often the response to the practice- are personally rewarding. One can do no better than quote the head of the art department at the DA, Lou Jie, who for 30 years has been involved in the practice: ‘With my face to the wall in the dark silence of the cave, stroke by stroke and painting by painting, I have often felt as though I were in direct dialogue with ancient masters …….I was gradually immersed in the wall paintings, finally becoming completely submerged in the virtuosity and artistic spirit of the original works. In this state of submersion, I transitioned through the mental states of self (wo), self-forgetting (wangwo), and no-self (wuwo), transported as I worked to a world of more than a millennium ago.’ While for many conservation practitioners the emotional response may not be as intense as Lou Jie’s, the sense of saving a wonderful work of beauty from destruction is a gratifying one. That may seem a naïve thing to say in today’s cynical world, but it is nonetheless an enduring truth.

The exhibition, Cave Temples of Dunhuang: Buddhist Art on China’s Silk Road, whose major sponsor is the Robert H.N. Ho Family Foundation, strives to reflect the issues discussed above. It includes: the richness of the Library Cave with its multiplicity of religious and secular documents and objects, loaned by four institutions; these items- predominantly Buddhist to be sure, but also Zoroastrian, Nestorian, Sogdian, Tibetan , and extraordinarily, Hebrew- comprise not only many religious categories, but also contracts, personal letters, and other types of documents. The exhibition demonstrates the beauty of the art with three meticulously rendered replica caves (275, 285 and 320), located on the plaza level of the Getty Center; the replicas, entirely faithful to the originals in their present-day condition and painstakingly created over years by Lou Jie and her team of artists in the Academy’s art institute, represent untold hours of minutely detailed work. Conservation of the site writ large, and of its art is a further theme of the exhibition, which depicts the decline of the grottoes as the Silk Road slipped into desuetude and the town of Dunhuang became a small forgotten vestige of its former glory as a pearl of the Chinese arm of the great trade routes to the West. The deterioration and abandonment, depicted so graphically in Aurel Stein’s photography from his 1907 foray, followed by the gradual recovery of the site beginning in the early 1940s, is powerfully conveyed in photographs. Cave 85, the locus of a ten year conservation effort by the GCI and the DA provides a visual feast for the visitor intent on learning about wall painting conservation. A ‘holographic-like visual immersive’ presentation of Cave 45, one of the glories of Mogao, will afford visitors the novel experience of being surrounded by three dimensional representations of the cave- one of the few at Mogao with a nearly complete ensemble of original sculpture. The central figure is the Buddha with his disciples Ananda and the ascetic Kasyapa flanking him, with two bodhisattvas, and two protective ‘Heavenly Kings’ at the periphery of the group. In this way four caves of the hundreds at Mogao can be visited in replica and virtual form. Videos of Mogao showing its settings, its exterior and cave interiors, and conservation activities are accompanied by rare books and maps from the collection of the Getty Research Institute, the GCI’s partner in organizing this exhibition, along with the DA.

An exhibition such as the present one faces hurdles in attempting to show the gamut of art, history, and conservation over the course of a millennium and a half. Yet by means of the various approaches taken using a full range of display representations, traditional and modern, and including such wonderful works as the Diamond Sutra, the earliest dated (868CE) complete printed book known and loaned by the British Library, an effective balance has been struck in the alliance of religious art, history, and conservation.

Change occurs, but the study of change- the hua xue of inimical processes that destroy what we value- provides a powerful antidote to deterioration. As we strive to show the visitor, in interesting and compelling ways, the tools and approaches for slowing the irreplaceable and inevitable, who knows whether young viewers of the immersive experience of Cave 45, or the cave replicas, or conservation of Cave 85, might be inspired to follow a life of preservation of the past to ensure a future for this wonderful site where for many years we have worked with the DA, forging friendships and enjoying a harmonious collaboration.

The Allure of the Past

The Art of Preserving the Past — Chinese Painting Conservation Program, Smithsonian Institute